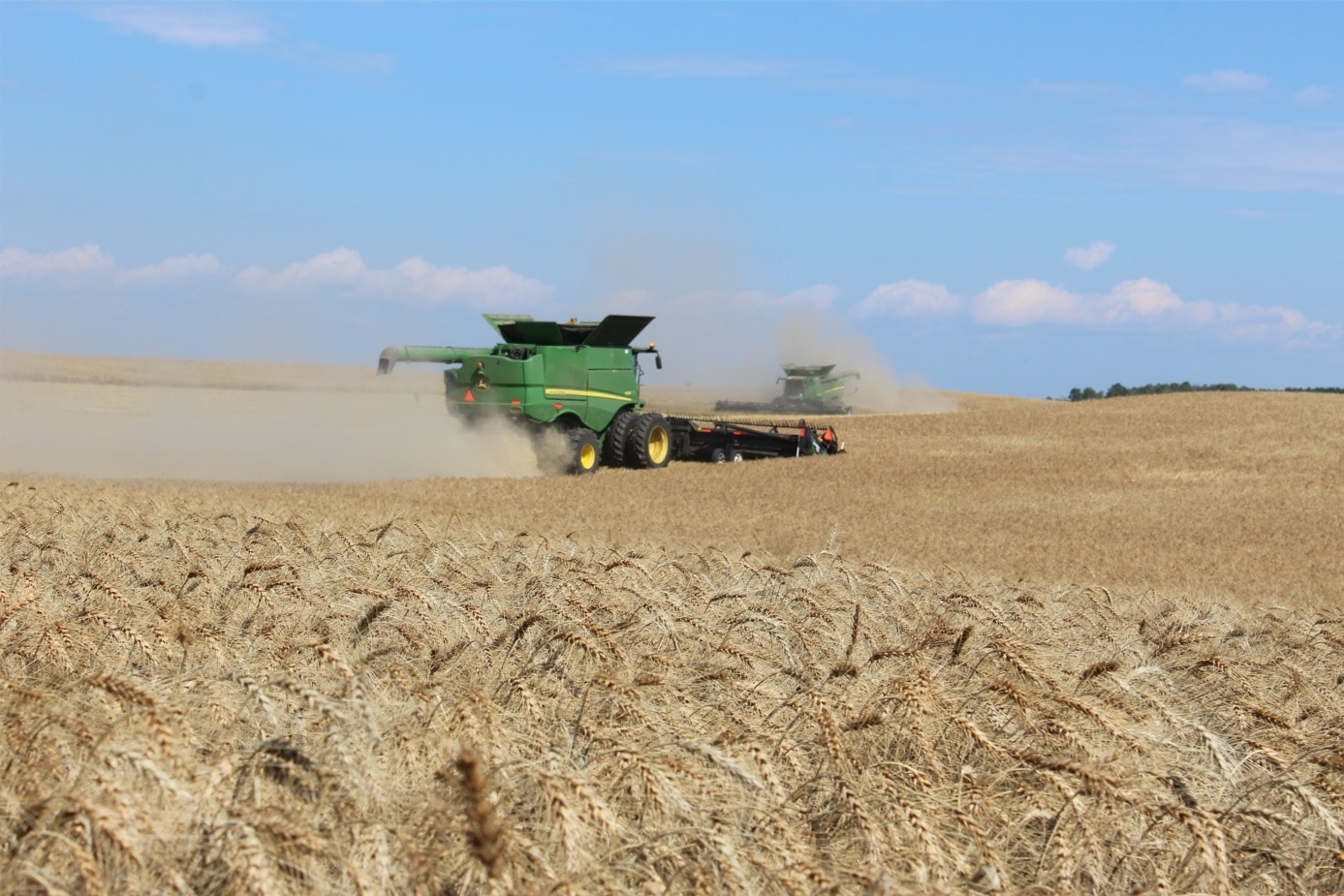 Manitoba’s Interlake region is no stranger to extreme swings in weather. More often than not, the area experiences high moisture levels and flooding, but that hasn’t been the case for the last three or four years. Now deep in drought, East Selkirk farmer, Doug Martin, has been weathering these storms since the mid-80s and remembers all too well the impacts of a dry 1988. But despite the year-to-year uncertainties, Martin has adapted and built an operation that is more resilient to change by implementing practices that better manage his risks. One of the things that helps him do this is growing winter wheat.

Despite the harsh growing conditions all crops faced this season, winter wheat has come out ahead in many areas. On Martin’s farm, his Wildfire winter wheat yielded 60 bu/acre while his spring wheat only hit 45. On top of the increase in yield, Martin cites a few other reasons why the crop is a mainstay in his annual rotation.

“Our winter wheat produced a lot of straw and straw is worth a lot more this year. It produced twice as much as our spring wheat,” Martin says, adding it didn’t take him long to sell the medium square bales that came off his 500-acre winter wheat fields.

Not only did he make money selling the straw, adding to his bottom line, marketing the crop is also easier than it used to be.

“Once harvested, the crop went straight in the bin and then right back out,” he says. “That’s just part of what makes it a good fit on our farm.”

Like many operations, the cost of machinery and labour can add up. Especially when trying to expand a business.

“We’ve expanded the farm the last few years, but I didn’t want to buy another combine and add to our costs,” he says. “I knew I had to spread out the harvest window to use our existing equipment better.”

Having winter wheat in his rotation is key to Martin’s plan of growing crops in harvest windows or in stages. “Growing winter wheat just spreads out our risk and our workload. It’s nice to have it in the ground every year.”

But will it germinate?

The canola is coming off the fields early this summer, and because of this, there has been an increased interest in planting fall-sown cereals. Early to mid-September is the ideal window to get winter wheat in the ground, and crop insurance in Manitoba now allows it to be seeded even later, with full coverage until September 25.

Thankfully, recent rains in some areas have given the parched prairie ground some much-needed reprieve, leading itself to good winter cereal growing conditions, but the crop doesn’t need much moisture to get started after seeding.

“Winter wheat can germinate with only one-third of an inch of rain,” says Ducks Unlimited Canada agronomist, Alex Griffiths. “What I tell producers is to never wait for rain. Get it in the ground as soon as you can and then the next shower will get it started.”

The trick to this, is seeding shallow. “Don’t seed deep,” explains Martin. “It has better germination that way and often small showers are enough to get the crop off and running.”

Winter wheat experts such as Griffiths say .5 to one inch is the maximum depth to seed the crop.

Last fall, some of Martin’s winter wheat didn’t germinate until later in the season, but once it did, it continued to grow and still came through the winter well. Agronomically, winter wheat is a very competitive crop, but he credits new varieties like Wildfire for their excellent winter hardiness package.

To test or not to test?

Both Martin and Griffiths encourage producers to get soils tested this fall. With the dry conditions, there could be a great deal of residual nitrogen leftover from the previous crop and it’s good to know what’s there and what is needed.

With fertilizer prices on the rise, Martin says split-applying nitrogen, half in the fall and half in the spring, may also be a good strategy. This is just another way to manage risks and to operate more economically.

For anyone new to the crop or for anyone who hasn’t grown it for a while, Martin stresses to manage your stubble properly.

“Watch your stubble as it can break,” he says. “Stubble management is key. Without proper stubble, it reduces the ability to trap snow and to protect the crop over the winter. You may have to slow down on the field especially when desiccating and straight cutting.”

One last practice Martin incorporates to manage costs is controlling weeds after seeding. Because winter wheat is so competitive, producers may not have to spray in-crop for weeds if they are taken care of in the fall.

“This can also save you on inputs if you don’t have to apply a broadleaf next year,” he says. “All these things add up.”

Previous
All Stories
Next